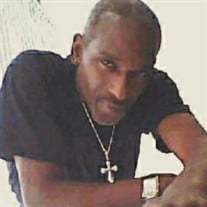 ROBERT JONAS WHITE, son of the late Joseph L. White, Sr. and Carolyn E. White, was born December 4, 1960 at Baltimore City Hospital in Baltimore, Maryland. He peacefully transitioned from this life on April 21, 2021. “Bobby,” as he was affectionately known, was the youngest of eight siblings. Bobby received his education through the Baltimore City Public School System. He was trained and worked in construction. He was a master in building renovations. Bobby did odd jobs for his family and friends. He was a handyman and a “jack of all trades”. At a young age, Bobby enjoyed mastering Karate. He was an avid Bruce Lee fan. Bobby was baptized into the Catholic faith and often attended St. Ambrose Catholic Church throughout his life. Bobby enjoyed spending time with his family. He attended all family gatherings. He enjoyed his siblings and his nieces and nephews. Bobby enjoyed the times he spent with his daughter Laverne, granddaughter Shakera and his son Jason.Bobby spent quality time for the bulk of his later years with his “Booda”, Annette. She affectionately called him “Rob”! Annette lovingly cared for him during his times of illness. Bobby enjoyed having a good time and was the “life” of the party. He was a real people person and talked to anybody and everybody. He was a real jokester and kept everyone in stitches with his pranks.Preceding him in death were his son Jason White, two brothers Joseph L. White, Jr. and Richard T. White, Sr. and several other family members and friends that are gone, but never forgotten. Bobby leaves to celebrate his life and cherish his memory: his daughter, Laverne Hightower; granddaughter, Shakera Sparrow; his “Booda”, Annette Gibbs; four sisters, Beverly White, Gloria Jiggetts (Clinton), Sylvia Wedlock, and Denise Young (Joseph); one brother, Dana A. White, Sr.; six nieces, eleven nephews, great-nieces, great-nephews and a host of loving relatives and friends

The family of Robert White created this Life Tributes page to make it easy to share your memories.

Send flowers to the White family.