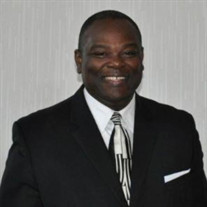 The Song of Reginald Bouknight Reginald “Reggie” Bouknight departed this life on Monday, July 26, 2021. He was the 9th child of late Superintendent Richard A. Bouknight and Mother Rosetta Bouknight, born on March 15, 1959 in Washington, DC. Reggie attended the public schools of Washington, DC, graduating from H.D. Woodson High School and obtaining his Bachelor of Music from The Catholic University of America in 1982. At an early age, he professed his faith in Jesus Christ and got his first taste of singing at Second Refreshing Spring Church of God in Christ where his father was the pastor. He was a background singer with his 10 brothers' and sisters' a cappella group -- The Bouknight Specials. His father once said, "I told my wife that Reggie was going to be a singer from the 'git go.” "He had one of the main voices in the group.” “I felt confident he would get what he wanted out of it." When he was little, he used to listen to classical music to relax. When he heard a performance of Leontyne Price and Luciano Pavarotti he thought to himself, “I would love to participate in music to that capacity." Before pursuing his music career at Catholic University, he sang with the H.D. Woodson Male Chorus, under the direction of Samuel Bonds. Reggie worked as a tractor trailer driver with the Hecht Company and Liberty Transportation. After 10 years of driving an 18-wheeler, he quit his job to sing full time in Washington DC, Baltimore and New York. Later he resumed work as a tractor trailer driver with the Sysco Company and Kenan Advantage Group. Reggie met his wife Rhonda Lathon while singing in a production of Scott Joplin’s “Treemonisha” under the direction of Nevilla Ottley of the Ottley Singers. They were married in 2004 and have been together for 16 years. They have two sons Ryland Holmes III and Nicholas Appel. Reggie performed throughout the United States and Europe. He attended the Tanglewood Music Center where he studied with Phillis Curtin and his artistic talent afforded him the opportunity to appear as soloist in performances of "Carmina Burana" and "Serenade to Music" at the John F. Kennedy Center of The Performing Arts. Making his operatic debut as "Mingo" with the Orlando Opera Company in 1983 began his extensive career in the world of music. He also performed with the Baltimore Opera, Metropolitan Opera (New York City), Opera International, Prince Gorge Opera, In Series, critically acclaimed role as "Idomeneo" and with the Vienna Light Opera. He appeared with Jessye Norman and Kathleen Battle in "An Evening of Negro Spirituals, conducted by James Levine and broadcast on PBS. Reggie was given the honor to sing for the celebration of life service for the late Honorable Judge Carl H. Multrie at the National Presbyterian Church in Washington, D. C. He sang a series of recitals in the Czech Republic during their South Bohemian Music Festival and was a guest artist at the Prague Castle. Reggie was a returning artist at the Embassy of the Czech Republic. He was a guest artist performing in the George Shirley and Friends concert at the Clarice Smith Performing Arts Center, Gildenhorn Recital Hall, University of Maryland, College Park. He performed at the Library of Congress, celebrating Antonine Dvorak in America, the musical influence of the Native American Rhythms and the African American Negro Spiritual, appeared as soloist with the Island Chamber Singers during their spring concert of Puccini's "Messa di Gloria" in Jacksonville, FL. Reggie performed with "Life Pieces to Master Pieces" a charitable organization educating, mentoring and developing Washington, DC inner city young men to become positive contributors to society. Reggie has performed at many churches in the metropolitan area, the Divine Science Church of the Healing Christ, St Mary’s Episcopal Church, All Souls Unitarian Church, Northeastern and others. He also performed at the Schiller Institute in NYC. Reggie was a faithful member of the Capitol Hill Seventh Day Adventist Church located in Washington DC, where he served as a Deacon and Director of the CHC Male Chorus. He also sang with the CHC Chorale under the direction of Dr. Laddie Bell. In his spare time, Reggie loved to work on cars, collect coins, and listen to all genres of music. He loved all types of sports, especially basketball and football. He was a Dallas Cowboy and North Carolina Tar Heels fan, where his son Nick played on the team. Reggie loved to travel with his wife and has been to Greece, Italy, Barcelona, The Vatican, Turkey, France, Aruba, Barbados, Bermuda, Canada, Cayman Islands, Curacao, Mexico, Puerto Rico, Saint Lucia, Saint Martin, Saint Thomas, Bahamas and others. He loved to help others and was a bone marrow donor (American Red Cross), worked with the homeless (CHC Acts of Kindness), and assisted his family, friends, neighbors .and others when they were in need. His beautiful life will forever be cherished in the life of his wife: Rhonda; his sons; Nicholas Appel & Ryland Holmes; his siblings; Evelyn Jones (Michael), Kimus Bouknight (Lisa), Lorraine Bouknight, Debra Walston, Carlston Bouknight (Gloria), Vernon Bouknight and Michelle Bouknight-Quick and host of relatives and friends.

The Song of Reginald Bouknight Reginald &#8220;Reggie&#8221; Bouknight departed this life on Monday, July 26, 2021. He was the 9th child of late Superintendent Richard A. Bouknight and Mother Rosetta Bouknight, born on March 15, 1959 in Washington,... View Obituary & Service Information

The Song of Reginald Bouknight

The Song of Reginald Bouknight

Send flowers to the Bouknight family.