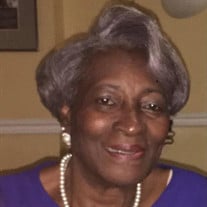 On May 11, 2021, while she slept, God gently touched Pauline, calling her to eternal rest. A day that will forever be met with mixed emotions, but God knew it was time. Pauline Jackson was born on October 26, 1943 to the late Paul Elisha Haynesworth, Sr. and Pearl Haynesworth (Reaves) in Fayetteville, North Carolina. Her father was in the United States Army, so the family traveled quite a bit; including living in Japan for two and a half years until he was sent to Fort Detrick in Frederick, Maryland. Pauline attended Frederick High School, graduating in 1961. She married Gerald Jackson, Sr., who was also in the United States Army, and raised their children. She left Frederick and moved to Washington, DC where she became head cook for the Officer’s Club at Walter Reed Army Medical Center. She attended and received her degree in culinary school. Over the course of her life, while raising her children, Pauline enrolled and graduated from Cosmetology School and went on to work as a stylist alongside one of her best friends, Karen Campbell (back in the day) at Karen’s salon, Magic Fingers. After leaving the Officer’s Club, she began cooking in the kitchen at Shiloh Baptist in Northwest Washington, DC. Those were very happy times for Pauline, as she loved fellowshipping with members of the church, catering special occasions, cooking for Busy Bees on Saturdays, or just preparing lunch after services. When Pauline joined Berean Baptist Church in Washington, DC, it didn’t take them long to see they had a true gem in their midst. She would soon begin preparing meals after programs and special occasions. Cooking was her passion, almost everyone who knew her can attest to the fact that she was really good at what she did. Someone asked, “what was her favorite dish she liked to prepare” – definitely a question that cannot be answered, because she could cook the pants off everybody. What was the family’s favorite – Potato Salad . . . every event, dinner, birthday, graduation, Sunday dinner we had, she already knew what she had to make, and no one did it better. Pauline will be greatly missed by all who knew and loved her. Forever in our Hearts, The Family

On May 11, 2021, while she slept, God gently touched Pauline, calling her to eternal rest. A day that will forever be met with mixed emotions, but God knew it was time. Pauline Jackson was born on October 26, 1943 to the late Paul Elisha Haynesworth,... View Obituary & Service Information

The family of Pauline Jackson created this Life Tributes page to make it easy to share your memories.

Send flowers to the Jackson family.