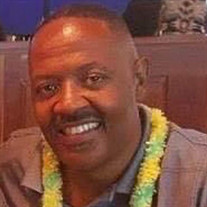 Almighty God, in his infinite wisdom and love, touched the heart of his beloved son, MATTHEW LLOYD MARCUS, on January 19, 2022, at University of Maryland Medical Center, Baltimore, MD where he transitioned into His presence after a lengthy illness.... View Obituary & Service Information

The family of Matthew L. Marcus created this Life Tributes page to make it easy to share your memories.

Almighty God, in his infinite wisdom and love, touched the heart...

Send flowers to the Marcus family.