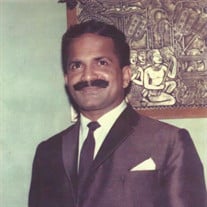 On Friday May 14, 2021, Madhusudhan H. Shirodkar, husband and father of three children, passed away peacefully at the age of 90. Madhu was born in Mumbai on May 8, 1931 to Premavati and Harishchandra G. Shirodkar. He received his Bachelors in Arts from University of Mumbai in 1948. Madhu’s passion for politics developed in his youth, preceding India’s independence in 1947. His passion continued as a diplomat representing the Indian Foreign Service in Kenya, Myanmar, Saudi Arabia and Washington DC USA. Subsequently, he practiced as a Certified Public Accountant and entrepreneur in the US. On May 26, 1957, he married Vilasini V. Shirodkar and together they raised three children. Madhu is survived by his wife Madhumati; by his daughter Shyla, her husband Peter Liiva, and their sons, Ryan and Aaron; by his son Sanjay, his wife Anka and their children, Griffin and Tara. His oldest son Nikhil M. Shirodkar passed away in 2019. Madhu is also survived by a caring loving family in India. Madhu was an avid fan of Indian Classical music and Marathi drama. He was very active in his community and served as the President of the Marathi Kala Mandal of Greater Washington, which presents cultural events to the local Maharashtrian community. Madhu’s favorite sport was tennis, which he played for many years. He was known for his humor, wit, gentle reticent ways, intelligent liberal insights into politics, and easy laugh. A funeral service will be held at March Life Tribute Center in Laurel, MD 20707. Donations can be sent to Smile Train Cleft Lip Charity at https://www.smiletrain.org. A celebration of Madhu’s life is in the works, details to follow.

On Friday May 14, 2021, Madhusudhan H. Shirodkar, husband and father of three children, passed away peacefully at the age of 90. Madhu was born in Mumbai on May 8, 1931 to Premavati and Harishchandra G. Shirodkar. He received his Bachelors... View Obituary & Service Information

The family of Madhusudhan H. Shirodkar created this Life Tributes page to make it easy to share your memories.

Send flowers to the Shirodkar family.