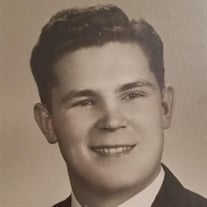 Lyle "Wes" Westrom entered the church triumphant on October 27, 2021. Wes was the eldest child of Grant and Hazel (Peper) Westrom, born on March 28th, 1936 in Osceola, WI,. The Westrom family moved to New Richmond, WI in 1946. He graduated from New Richmond High School in 1954 and in the fall entered St. Olaf College as a pre-seminary student. A short time later he realized it wasn’t for him. He then went to work with his uncle as a cement finisher. Wes married Carol Olson in June of 1955. Seeing no future in construction, he enlisted in the Navy in August. During his career in the Navy, he was stationed in Guam, Washington, D.C, aboard the USS Springfield in the Mediterranean, Fort Meade, MD, Washington, D.C. (again), Bremerhaven, Germany, and back to Fort Meade, MD. where he retired in July of 1975 as Master Chief. After Wes retired from the Navy, he took a job with a communications and data systems contractor at the Washington Navy Yard until August of 1978. He then went to work for the Social Security Administration (SSA) as a Computer Systems Programmer. Wes worked at SSA for 30 years. Wes and Carol had 4 children before their marriage ended in divorce in February of 1981. On August 22, 1981, Wes married Dorothy “Dottie” Wagner. Wes and Dottie’s marriage produced another daughter. Despite not feeling led into the ministry, throughout Wes’ life he stayed involved with his church community. His faith journey began as a youth at First Lutheran in New Richmond, WI and continued at St. John’s Lutheran in Linthicum, MD and at Zion Evangelical Lutheran in Tacoma Park, MD. Ultimately finding his church home at Holy Trinity Lutheran Church, where he was a member for over 35 years. He played in the handbell choir, ran the sound board for contemporary worship service, sometimes filled in playing the keyboard and for a period of time directed the choir. Wes enjoyed cooking for the Men’s Ministry which was meeting once a month for breakfast, fellowship and Bible Study. He led a weekly bible study for several years and willingly served as usher, greeter, reader or assisting minister. Words from Wes: “Every once in a while I miss what I left behind over 40 years ago!! But I’ve grown fond of blue crabs, rock fish, and Chesapeake Bay oysters. So like the Westroms who went “West” many yrs. ago. This “one” has taken “root” on the East Coast!!!” He lived in Columbia, Maryland with his daughter, Erika. Wes is survived by five children - Deyonne (Bill) Eckles, Mark (Jan) Westrom, Sandie (Robert) Magner, Paul (Leigh) Westrom and Erika Westrom, 11 grandchildren, 15 great grandchildren and 1 great-great grandchild, two sisters - Marlis Wienke, Karen (Jerry) Barslou, a sister-in-law Lynn Carper, many cousins, nieces and nephews.

The family of Lyle "Wes" Westrom created this Life Tributes page to make it easy to share your memories.

Send flowers to the Westrom family.