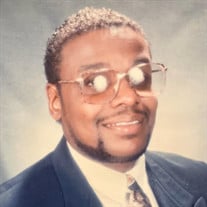 On October 5, 1958 God blessed the family with their youngest child, Jerriel Neloms. He was the seventh child of Thelma (Satterwhite) and Henry Neloms, Sr. Jerriel was born in Cincinnati, Ohio and lived in Evanston where he would spend his childhood and through his 20’s. Jerriel was affectionately called Jerry and “Buster.” He brought a special light to the family and every family member found him a space in their hearts reserved just for Jerry. He loved life and enjoyed every moment as he found joy in each day. He found time to always blurt out his special laughter that was infectious to everyone around him. He loved to dress up and be “clean” as he would say, knowing that he looked his very best at all times. Jerry fondly remembered his childhood as a time of fun and family. He played football from a young age and all through his high school years. He graduated in 1976 from Withrow High School. Jerry talked often about family trips each summer to Georgia and his country experiences. He also remembered his special and personal time with his father. He would accompany his father everywhere and was known as “Ironside” in the neighborhood . He was devastated by the loss of his father when he was 12 years old. His three older brothers began to fill this void. He became especially close to his brother, Tim, as they loved sports and LOVED GOOD FOOD! This gave him the nickname “The Buzzard”. Jerry enjoyed watching football, whether it be high school, college or professional. He was an overall sports lover and tried never to miss Ohio State or the Cincinnati Bengals on television. Jerry traveled to Dallas, Texas to visit his sister and this became Jerry’s new home with his nephew and life-long best friend, Gordon “Gordie” Anderson. There he began his career in transportation and he loved driving large vehicles. After his time in Dallas, Jerry decided to return to Washington, DC to join the family business and also where he met his bride, Regina Davis, and helped to raise her daughter, Ima Thompson, as his own. While the marriage ended a few years later, they remained friends. He later returned to his career in transportation and experienced many dangerous accidents and one that brought him to become disabled in 2015. He then began spending time with family and friends as he enjoyed life despite his many health concerns. The numerous and loving memories of Jerry will always be cherished by his three brothers: Donald of Erie, Pennsylvania, Henry Jr.(Shirley Ann) and Timothy (Gayle) both of Silver Spring, Maryland and his sister, Judy Adams (Ernest) of Fort Washington, Maryland. His nephews, Henry III (Stacey) of Bowie, Maryland and his namesake, Jerriel Maxwell Neloms of Silver Spring, Gordon and Gary Anderson of Cincinnati, His nieces, Tracie Dunlap (Charles), Kisha Neloms and Cari Adams each in Maryland, Connie Jackson (Daniel) and Darlene Toney (Curtiss) of Cincinnati; Preston, Eric, Kenny, Angela and Jackie of Detroit, MI. Local great nieces: Nia, Kiera, Hannah; and great nephews: Daniel, Carl, Caden, Cameron & Jacob. A host of great nieces , great nephews, cousins, friends and those that he adopted as family and his long time friend, Earlene Tanoh of Laurel, Maryland. Jerriel was preceded in death by his parents, Thelma and Henry Neloms, Sr. and sisters: Claudia Anderson and Joyce Neloms.

On October 5, 1958 God blessed the family with their youngest child, Jerriel Neloms. He was the seventh child of Thelma (Satterwhite) and Henry Neloms, Sr. Jerriel was born in Cincinnati, Ohio and lived in Evanston where he would spend his... View Obituary & Service Information

The family of JERRIEL NELOMS created this Life Tributes page to make it easy to share your memories.

On October 5, 1958 God blessed the family with their youngest...

Send flowers to the NELOMS family.