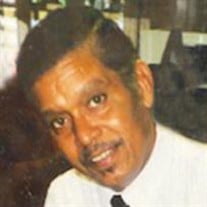 Gary Thomas Steeple, son of the late Thomas Bowman and Adelaide Steeple Davis, was born on March 20, 1946 in Baltimore, Maryland. He departed this life on July 26, 2020 at the age of 74. Gary graduated from Baltimore City College High School (City Forever!) and soon after was drafted into the United States military. During the Vietnam War, he served as a Sergeant in the army, where he received several commendations including: the National Defense Medal, Vietnam Service Medal, Vietnam Campaign Medal, two (2) Overseas Bars and a Meritorious Unit Citation. Upon his return to the United States, Gary continued his education a Morgan State University, where he completed a dual degree in Business Administration and Music. Gary had a love for Jazz music and in fact was a talented saxophonist. He was a member of the group Horace and the Saratogas with whom he recorded the song, “I’m giving you your freedom”. His love for music matched only by his love for baseball. As a Baltimore Native, Gary was a passionate Orioles fan. In 1979, he met and married the love of his life, Venise Fullard Steeple, and from this union came three (3) children, Venyell, Gary II “Deuce” and Venine. Friends and family knew Gary as a humorous man, always eager to share one of his many anecdotes or euphemisms. His answer to “Why?” always remained “It seemed like a good idea at the time”. Of course, if you see him in a fight with a bear, you should “help the bear”. Things are usually “so far so good” in Gary’s world, except when there “fair to middling”. Because he would never say goodbye…..LATER. He leaves to mourn: his wife, Venise Steeple; two daughters, Venyell Steeple-West abd Venine Steeple-Roberts (Justin); one son, Gary Thomas Steeple II “Deuce”; eight grandchildren, Samaira, Jordan, Morgan, Aiyauna, Brooke, Hugh “Mason”, Javien and Gesean; two sisters, Brenda Carr (Robert) and Beverly Saint Rose; two brothers, Howard Bess (Pam) and Anthony Steeple; three brothers-in-law, Youman Fullard Jr., Vincent Fullard and Jeffrey “Shawan” Fullard; and a host of other relatives and friends.

Gary Thomas Steeple, son of the late Thomas Bowman and Adelaide Steeple Davis, was born on March 20, 1946 in Baltimore, Maryland. He departed this life on July 26, 2020 at the age of 74. Gary graduated from Baltimore City College High School... View Obituary & Service Information

The family of Gary Thomas Steeple created this Life Tributes page to make it easy to share your memories.

Send flowers to the Steeple family.