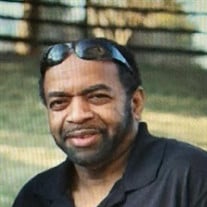 Edward Lawrence Ramsey was born in Brunswick, Georgia on December 2, 1955 and departed this life on January 29, 2022 following a brief heart-related illness. Ed spent over 20 years proudly serving in the United States Army. His duty stations included military installations in Panama, Louisiana, Walter Reed Medical Center in Washington DC, and Fort Sam Houston, in San Antonio, Texas. Following his military retirement, Ed served as a clerk in the United States Postal Service for 27 years. Most of those years were spent at his beloved Olney Post Office where every customer became a friend. Ed enjoyed his side operation as a lawn care specialist and enjoyed meeting and greeting his weekly customers. Ed believed that in addition to a daytime job, one should also have a side job. He taught this principle to all of his hardworking sons. Ed was also known for his love of automobiles and enjoyed working on his vintage BMW M3 which he continued to drive every day. His Sunday grill sessions during the warm spring and summer months were relaxed yet unforgettable. He leaves to mourn his loving wife of 31 years Sharon Mosley Ramsey, and 4 sons, Edward Spencer of Germantown, Md, Lance Stanton and Hunter Shane of the home, and oldest son Marcus Ramsey of Virginia Beach, Va, a brother Bobby Ramsey of New Orleans, 3 grandchildren Sydney Moss, Teonnie Wood, and Ayden Collins- all of Virginia, and sisters-in-law Cynthia Mosley Coleman (Ron) of Ellicott City, MD, Sharon’s twin sister, Karen Mosley of Durham, NC, an aunt Delores Delcine Hester of Ashton, Md, 4 nieces and nephews Derek, Courtney, Noelle, CJ and a host of friends in his loving community of Olney, Maryland.

The family of Edward Lawrence Ramsey created this Life Tributes page to make it easy to share your memories.

Edward Lawrence Ramsey was born in Brunswick, Georgia on December...

Send flowers to the Ramsey family.