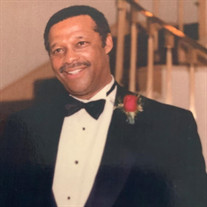 In Lieu of Flowers: Donations can be made to the Alzheimer’s Association in Charles D. Shields’ name on his donation tribute page. Donation Tribute Page: http://act.alz.org/goto/CharlesShields Charles (Chuck) Davis Shields, youngest child of four, of the late Charles Shields and Virginia Davis of White Stone, Virginia, was born on December 15, 1936, in Baltimore, Maryland. Charles received his early education in Baltimore and completed his high school education at A. T. Wright, after his family moved to White Stone, Virginia. He continued his education at his “Home by the Sea,” Hampton Institute, in Hampton, Virginia, where he received a Bachelor of Science degree in architectural engineering in 1959. While at Hampton, Charles excelled in academics, athletics and enjoying the social aspects of college life. He was captain of the Hampton Pirates swim team, parliamentarian of the Olympic Social Club, better known as the “Pics,” and a member of the “Pirate Battalion” ROTC. Charles met Yvonne Portlock while attending Hampton. They were married on July 9, 1960. This union produced three children, Kevin, Yvette and Yvonne. All three of them, following in their parent’s footsteps, were educated at Hampton University, as it is now known. Charles was truly a family man. He and his children skied, swam, sailed, scuba dived, golfed, refurbished their homes and traveled together. All the homes in which they lived had the benefit of his refurbishing expertise. Charles was commissioned as a 2nd lieutenant at Fort Campbell, Kentucky, home of the 101st Airborne Division. After being promoted to 1st lieutenant, he became a paratrooper and served as Commanding Officer, company “C,” 70th Engineer Battalion from March, 1960 through October, 1962. Upon separation from the U.S. Army, Charles moved his family to Boston, Massachusetts, where he obtained employment as a draftsman at the Port Authority-Boston. Two years later, he began his career at IBM Corporation as a salesman in Albany, New York. He excelled at his occupation, qualifying for the IBM hundred percent club every year he was a salesman, and becoming a Branch Manager in just a few years. He was a Branch Manager in offices in Lexington, Kentucky, Greensboro, North Carolina and St Louis, Missouri. Charles retired from IBM Corporation after 29 years of service. Charles’ “second occupation” was golf which he pursued with a passion. He was a member of the Washington DC Pro-Duffers, where he served as tournament director for several years. He was initiated into the Alexandria-Fairfax Alumni Chapter of Kappa Alpha Psi in the spring of 1998. Charles also enjoyed sailing. With his friends he purchased a sailboat, “The Partnership.” Aboard The Partnership he enjoyed sailing the Severn River and mooring in the Annapolis “Ego Alley” with family and friends. Charles and Sandra (Sandi) Robinson met in 1996. They were joined in holy matrimony on Valentine’s Day, February 14, 1999. Since they were both retired, they were able to spend lots of time together. Charles’ waterfront home in White Stone gave them the opportunity to entertain their many friends and family with numerous activities. Annually, Charles invited some of his Hamptonian classmates for a weekend at his home in White Stone. Those weekends were full of activities and reminiscing about their days at Hampton Institute. Charles and Sandi’s timeshares in Mexico afforded them the opportunity to spend memorable, fun times with their close friends and family in Cabo and Ixtapa. Charles and Sandi did almost everything together, including partying, dancing, and playing golf. Charles leaves to cherish his memory his wife, Sandi; son, Kevin, and his wife, Yvette; daughter, Yvette Shields; daughter, Yvonne Black, and her husband, Michael; grandson, Kerrington Shields; granddaughter, Kaitlyn Shields; sister-in-law, Pamela Cooley, and her husband, Hector; nieces, Barbara Wiley, Alice Harvey, Nellie Maskal, Jeanette Burke; nephew, Brian Shields and a host of family and friends.

The family of Charles Shields created this Life Tributes page to make it easy to share your memories.

In Lieu of Flowers: Donations can be made to the Alzheimer’s...

Send flowers to the Shields family.