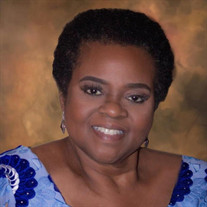 Charlene Ann Tetteh was born on December 4, 1959 in Baltimore, MD to Mrs. Ernestine Roberts Tetteh of Cobb County, Georgia and Mr. Charles Tetteh of Salt Pond, Central Region, in Ghana, West Africa. Charlene grew up around friends and family, riding bikes, bowling, playing the trombone, and going on long road trips to Miami to visit loved ones. She attended elementary school at St. James Catholic School and high school at Notre Dame Preparatory School for Girls in Towson, MD. Following graduation from high school, she entered Rensselaer Polytechnic Institute (RPI) in Troy, NY at the age of 16. There she met the young man who would become her husband, William “Butch” Burton, from Pittsburgh, PA. They both graduated from RPI in 1980, Charlene with her degree in computer science and Butch with his degree in nuclear engineering. Charlene began her career as a computer specialist at Computer Task Group and Group Health Associates. She also worked as a contractor at several companies, including the Department of the Navy. Charlene also found time to work part time at local retail stores including The Answer and Value City, which she enjoyed because she would often “leave her paycheck there” and come home with lots of goodies for her family and friends! Charlene also found great satisfaction in dedicating herself to public service, serving as a local election judge during elections every 2 years and as a census taker for the United States Census Bureau. Charlene and Butch married on January 11, 1986 and shortly thereafter had their daughter, Ashley Nicole Burton (Adjoa). Despite her very busy schedule, Charlene made a point to support Ashley in all of her many activities. Just to name a few, Charlene volunteered as a Cookie Mom during the annual Girl Scout cookie sales drives. During Adjoa’s time at the Nationhouse African School, Charlene volunteered and sold African clothing to support Nationhouse’s Pan-African Extravaganza Dinner-Dance, the Taratibu Dance Troupe and annual Anniversary Dinner. When Ashley joined the swim team at Flowers High School, Charlene took up the task of being the school’s representative scorekeeper at all of the swim meets. When Ashley attended the University of Maryland Baltimore County (UMBC) as a Meyerhoff Scholar, Charlene was active in the Meyerhoff Parents Association. Following Ashley’s graduation, Charlene became a partner with Ashley as she pursued a career in real estate investment. Anything that Ashley decided to do, Charlene was sure to be there in full support. When Charlene’s younger sister, Amy, passed away suddenly, Charlene became surrogate mother to Amy’s 3 children: Victoria, Kalonji, and Joshua. Because Josh was only 7 when Amy passed, Charlene took particular time to support him, taking him to karate lessons and matches and taking him to soccer practice and games. Charlene was also the consummate hostess and game leader. She organized parties on the 4th of July, Thanksgiving and Christmas, and was the game master at Kwanzaa. She always made sure that everyone had a wonderful time. Charlene began to get sick and discovered that she had uterine cancer. For the next 3 years she battled the cancer mightily, but finally succumbed on June 30, 2021, peacefully with her daughter and husband by her side. She is preceeded in death by her parents and sister, and leaves behind her beautiful daughter, Ashley; her loving husband, Butch; her brother-in-law, James Griffin; her niece and nephews Victoria, Kalonji, and Joshua Griffin; her closest cousin Allen Roberts, and countless other relatives and friends. She has left a legacy that others can love, admire, and respect, and she will be loved forever!

The family of Charlene Tetteh Burton created this Life Tributes page to make it easy to share your memories.

Send flowers to the Burton family.