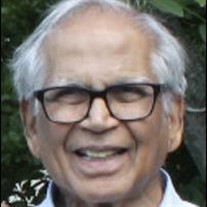 Dr. Anandu Devarao Vernekar died peacefully at his home, surrounded by his family on June 11, 2021, at the age of 90. Dr. Vernekar is survived by eldest daughter, Anita Shankar and husband, Anuraj, and grandchildren Poonam, Sonam, Anjali and Janam; his son, Sunil Vernekar; and his youngest daughter Nutan Jaeger and husband Ralf, and grandchildren Jeevan, Salena and Manisha. Dr. Vernekar was born in a small village, Hosali, in Karnataka state near the port town of Karwar. He was one of seven children in a family of modest means. He had many firsts of his family in his life, he was the first to have completed a high school education, the first to leave the village to attend college and received a Bachelor of Science degree at the University of Pune in Statistics, the first to move to America, first to complete a doctorate, and many more. On December 24, 1959, he married Sumitra Revankar and worked at the India Meteorological Department in Pune, India as a statistician. In 1961, he traveled to the US to begin his graduate studies in Meteorology at the University of Michigan, completing a Master of Science in 1963 and receiving his Doctor of Philosophy in 1966. He immediately got a job as a meteorologist in Hartford, Connecticut and ultimately took up a professorship at the University of Maryland (UMD) in 1969. At UMD, his research interests were general circulation of the atmosphere, climate modeling, and monsoon circulations. He taught numerous graduate courses in statistics and meteorology. From 1976-77, Dr. Vernekar served as a Senior Fellow of the Advanced Study Program of the National Center for Atmospheric Research (NCAR) in Boulder, Colorado; from 1979-80, he was Scientific Advisor to the Royal Netherlands Meteorological Institute, DeBilt, the Netherlands; from 1989-90, he was Acting Chairman of the Department of Meteorology, University of Maryland in College Park, Maryland. Professor Vernekar was a Fellow of the American Meteorological Society and continued as Professor Emeritus at UMD. Dr. Vernekar was a generous, kind, and intelligent soul, who deeply loved his family and was deeply loved. He lived his life with grace. Everyone who met him was positively impacted by his presence. He will always live in our hearts.

Dr. Anandu Devarao Vernekar died peacefully at his home, surrounded by his family on June 11, 2021, at the age of 90. Dr. Vernekar is survived by eldest daughter, Anita Shankar and husband, Anuraj, and grandchildren Poonam, Sonam, Anjali and... View Obituary & Service Information

The family of Anandu Devarao Vernekar created this Life Tributes page to make it easy to share your memories.

Send flowers to the Vernekar family.