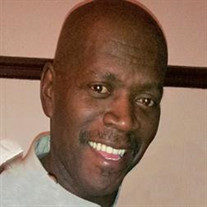 Alfred James was the sixth of seven children born to the late Esler & Priscilla James in Baltimore, MD on July 24, 1951. He was preceded in death by his brothers Robert, Raymond and Victor James. Alfred was raised in a family that worshiped and honored the Lord. As a child he attended Christ Temple Church under the leadership of the late Rev. Maine V. Johnson, and he continued his spiritual journey into adulthood joining Mt. Olive Christian Church (Disciples of Christ) under the leadership of our beloved pastor Rev. Marcus D. Adams Sr. Alfred’s elementary and junior high school education began in Maryland. He spent his high school years in Pomona, California and graduated from Ganesha Senior High School in 1969. He was always active in sports, music, mechanics and always a hard worker. Upon his return to Maryland in 1970 he maintained the same momentum by making good use of his many talents; one of which was forming a band with his late brother Victor. He also earned his Black Belt in Martial Arts and became an instructor; imparting his knowledge and sharing his gifts. Always up for a challenge he obtained a degree in electronics from the Maryland Vocational & Technical Rehabilitation School. Alfred was truly a jack of all trades! He was an Audio/Visual Technician, Auto Mechanic, Auto Body and Fender Technician and he was well versed in Construction Contracting and Wood shop. His work experience included Pep Boys, The Waterfront, Canyon Central Soya Grain Elevator as Grain Inspector, Liberty & Valley TV Repair, Comcast Cablevision Installation & Repair, Magnavox Electronics, the Dub Center, and as an A/V supervisor for Howard County Public Schools. Upon retiring he continued his position at the Maryland Stadium Authority which was his side job for the past 19 years. He recently turned in his equipment in April of this year. His extensive resume is proof that a challenge was his ABSOLUTE joy! Alfred made a collection of friends along the way in his lifetime & it wasn’t anything he wouldn’t do anything to help someone in need. In 2006 he meet Silveria Rubin, they married in 2010 and began a family of 2 sons (Alfred W.James the Second,) (Raphael Nicholas James) & a daughter (Zelene Sophia James) he also leaves to cherish his memory his children (Hertasha,) (Wandell TJ, Jontelle, & Nicole. His siblings Earl James(Sydney) Clarence James(Alice) Joyce Hall, Arlene Garris(Louis) Miner James, Ruth James, Mildred Bazemore(Jacob),and Adelphia Brooks(Tyrone) his Pride & Joy Nephew Damon Alexander Garris(Sakeena) a host of relatives, Aunts, Uncles, Nieces Nephews Cousins & Friends.

Alfred James was the sixth of seven children born to the late Esler & Priscilla James in Baltimore, MD on July 24, 1951. He was preceded in death by his brothers Robert, Raymond and Victor James. Alfred was raised in a family that worshiped and... View Obituary & Service Information

The family of Alfred W. James created this Life Tributes page to make it easy to share your memories.

Alfred James was the sixth of seven children born to the late...

Send flowers to the James family.